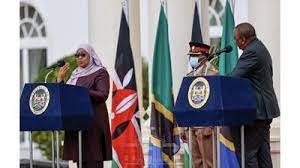 Kenya will waive work and business permits for investors from its neighbour Tanzania, President Uhuru Kenyatta said on Wednesday, as his counterpart made similar overtures in a thawing of often frosty relations between the two countries.

Kenya, east Africa’s biggest economy and one of its most liberal, and Tanzania, which still imposes fairly tight capital controls and ranked No. 2, have long tussled for influence.

“The only thing you will be required to do is to follow the laid down regulations and the laws,” he told the meeting, attended by Tanzanian President Samia Suluhu Hassan.

Relations between the two neighbours have been at times testy and got worse under Tanzania’s late President John Magufuli, with officials at times trading barbs over trade restrictions, and last year, over COVID-19 compliance.

Hassan, was sworn in in March after Magufuli died, said her government had embarked on tax and other business reforms to make it easier for Kenyan investors to operate in Tanzania.

Hassan’s office said late on Tuesday the two governments had also pledged to speed up completion of electricity transmission and road construction projects Kenya and Tanzania are jointly carrying out.

The two governments also agreed to speed up groundwork for the construction of a natural gas pipeline linking Tanzania’s commercial capital Dar es Salaam and Kenya’s port city of Mombasa.