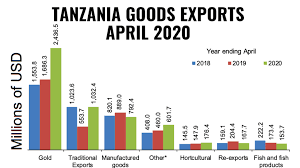 After recording trade surpluses for three consecutive years, the fall of exports has turned Tanzania’s trade with Kenya into a deficit.

According to Tanzania Revenue Authority (TRA) and Bank of Tanzania (BoT) computations, provisional data shows that Tanzanian trade with Kenya recorded a deficit of $35.8 million in 2018, down from a surplus of $90.2 million in 2017. The last trade deficit between Tanzania and Kenya was recorded in 2014, showing a deficit of $208.7 million before jumping into a surplus of $491.7 million in 2015! However, the trade surplus dropped to $46.1 million in 2016 due to a dramatic fall in exports to $313.8 million, down from $731.4 million in 2015.The computations also show that, in 2018, Tanzanian exports to Kenya were valued at $213.7 million, lower than the $291.5 million recorded in 2017. On the other hand, imports increased to $249.5 million in 2018, up from $201.3 million in 2017. The provisional data shows that, regionally, the trade balance between Tanzania and the other East African Community (EAC) states continued to remain on the surplus side for four consecutive years.

In 2018, Tanzania’s trade with EAC had a surplus of $141.8 million, lower than the $193.3 million surplus recorded in 2017. Tanzania’s trade deficit with the other EAC states was only recorded in 2014, at $108.3 million before jumping into a surplus of $581.7 million in 2015 – and $130.3 million in 2016. Kenya is currently the leading destination and major source of Tanzania’s intra-EAC exports and imports respectively – followed by Uganda. Tanzania’s major exports in the EAC region were beans, maize, sisal rope, tea and mosquito nets. Major imports were medicines and soaps. All in all, Tanzania has continued to record trade surpluses with the other EAC member states, including especially Uganda, Rwanda and Burundi.

According to the computations, the largest value in terms of a trade surplus in 2018 was recorded with Rwanda ($78.2 million), followed by Uganda ($52.6 million). Burundi was at the bottom, with a trade surplus of $46.8 million in favour of Tanzania.