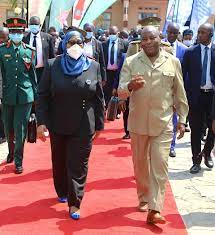 PRESIDENT Samia Suluhu Hassan has instructed the Minister for Industry and Trade Prof Kitila Mkumbo to work on all barriers facing the Tanzanian and Burundian business community.

Equally, she instructed the Minister for Works and Transport Dr Leonard Chamuriho and the Managing Director for Tanzania Railway Corporation TRC Masanja Kadogosa to improve railway transportation linking the two countries in a bid to smoothen movement of people, goods and services.

She was of the view that the improved railway line connecting the two countries would play a crucial role in increasing the volume of cargo being transported to Burundi from Tanzania, and vice versa.

The Head of State made the directives yesterday when addressing a Business forum between Tanzania and Burundian traders, in Bujumbura, as she was completing her two -day state visit in Burundi.

According to her, the Burundi- Tanzania business forum was a clear indication that the two countries are enjoying cordial business relations, saying maintaining and taking further the existing ties was vital.

Going by statistics, she said so far, a total of 17 companies from Tanzania have invested in Burundi in the construction, finance, health, transport and mineral sectors.

There are 18 companies from Burundi that have invested in Tanzania in various sectors, these statistics show the equal shares of balance of trade between our two countries, but we have to increase the volume, especially in sectors that are yet to be utilized, she expounded.

She also explained the need for traders form the two countries to make better use of the East African market by adding value to their products and services.

President Samia also encouraged members of the business community to utilize the available opportunities in the agriculture sector in both countries, since the sector plays vital roles in creation of employment especially for the youth.

Tanzania has a total of 44 million hectares of fertile soil, out of it 10 million hectares are yet to be utilized, therefore we have a great potential and promising future in the agriculture sector in Tanzania, she noted.

In another development she informed members of the forum that the government of Tanzania has continued to upgrade the ports of Dar es Salaam, Kigoma, Kalema, Kasanga and Kabwe in its move to ease movement of people and their goods, asking Burundian traders to continue using the Tanzanians ports in their business.

She also said that Tanzania has invested heavily in the health sector, especially in specialised healthcare by training medical specialists and purchase of modern equipment.

Meanwhile, President Samia met and held talks with Tanzanians living in Burundi, where she expressed her gratitude for the warm reception since she arrived in the country on Friday.

She commended the Tanzanian community for participating in various social activities in Burundi and their home country, where they donated desks to Kagera earthquake victims in 2016 and MV Nyerere accident in 2018.

President Samia said that citizens living outside their country are an important group due to their contribution in their home countries.

According to her, it is estimated that 1 million Tanzanians are living in various countries in the world. The President said according to the Bank of Tanzania, Tanzanian Diaspora sent home an estimated 475.65 million US dollars in 2018.

Following your contributions, the government has been taking various measures to safeguard your welfare, including establishment of a Diaspora department at the Ministry of Foreign Affairs, she said.

The Head of State, however, called on all Tanzanians living outside the country to register to the embassies in the countries they reside in so that it can be easier for the government to serve them and benefit from various opportunities arising in their home country.