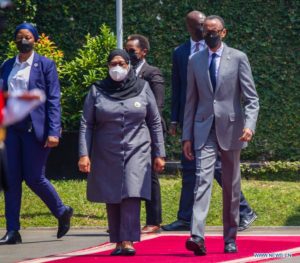 Rwandan President Paul Kagame on Monday said cooperation agreements signed between his country and Tanzania earlier in the day will give new impetus to the implementation of joint projects like standard gauge railway.

“Rwanda and Tanzania share more than just a border. Our strong historical ties and common aspiration to deliver prosperity to our people have always been central to our cooperation,” Kagame told a joint press briefing with his visiting Tanzanian counterpart Samia Suluhu Hassan in the capital city Kigali, shortly after they witnessed the signing of four cooperation agreements in the areas of information and communication technology, immigration, education and regulation of medical products.

There is a lot more the two countries can learn from each other in the spirit of strengthening trade ties, ensuring prosperity and development of the economies and peoples, said Hassan, adding that the signing of the agreements would pave the way for this.

She also highlighted the need for cooperation in tackling the COVID-19 pandemic and in full operation of the one-stop border post at Rusumo, a town on Rwanda-Tanzania border.

Rwanda and Tanzania in 2018 agreed on joint construction of a standard gauge railway from Isaka in northwestern Tanzania to Kigali to facilitate logistics movement between the two countries.

Rwandan Minister of Infrastructure Claver Gatete in July presented a bill to the parliament that provides a framework for the country’s implementation, management and maintenance of the standard gauge railway project, saying the country plans to commence the construction as soon as the railway line reaches Isaka.

The government has resumed discussions with partners on the funding of the projected railway, which is expected to cost the central African nation about 1.3 billion U.S. dollars.