KAMPALA, Uganda (AP) – African leaders and campaigners are pressing the international community to do more to help poorer and vulnerable nations adapt to climate change, seizing on evidence showing the continent to be the most endangered by the effects of global warming.

The head of the African Union, Congolese President Felix Tshisekedi, said other parts of the world must contribute half of the $25 billion the continent needs to run an adaptation program over the next five years. The balance will come from the African Development Bank.

Tshisekedi spoke Tuesday before an Africa-focused summit at the U.N. climate conference in the Scottish city of Glasgow. He was one of several leaders who highlighted Africa’s plight in the face of climate change despite being the populated continent least responsible for global emissions.

Tshisekedi noted that the global effort on climate change “can’t be won unless it is won in Africa,” which is home to 1.3 billion people. Africa’s 54 nations contribute only about 3% of global emissions, a fact that surprises some ordinary Africans when they find out. 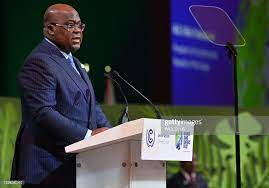 Democratic Republic of Congo’s President Felix Tshisekedi delivers his message during a session on Action on Forests and Land Use, during the UN Climate Change Conference COP26 in Glasgow, Scotland, Tuesday, Nov. 2, 2021. (Paul Ellis/Pool Photo via AP)

“It is a starting point rather than a ceiling, and it will contribute to building trust and confidence,” Tshisekedi said of the $12.5 billion Africa needs to raise for climate-adaptation projects.

He said he hoped the money would be raised before the next annual climate conference, to be held in Africa.

World leaders are already pledging toward adaptation efforts, and it remains to be seen how much will be raised for Africa when the two-week Glasgow conference ends.

In the meantime, some African leaders and campaigners are applying pressure, noting that a previous pledge to raise $100 billion for Africa was never honored.

Patrick Verkooijen, chief executive of the Netherlands-based Global Center on Adaptation, said the situation for Africa is “adapt or die,” noting that the effects of climate change “are at Africa’s doorsteps today.”

Alok Sharma, a British official who is leading the climate conference known as COP26, spoke of Malagasy women in Madagascar facing “a bleak future” of being unable to farm because of challenges stemming from climate change.

“The need is great, and the injustice is stark,” he said.

Others who spoke Tuesday included U.S. Secretary of State Antony Blinken, who said adaptation efforts were “a priority” for Washington. International Monetary Fund Managing Director Kristalina Georgieva called for the removal of obstacles to the empowerment of women as part of broader efforts to strengthen Africa’s resilience amid climate change.

Eze Christiana, a Nigerian living in the Kenyan capital of Nairobi, said she doesn’t think it is important to gather and talk about climate change.

“We just need to adapt to it and take it the way we see it,” she said of global warming.

According to a report last month from the World Meteorological Organization and other U.N. agencies, Africa’s people remain “extremely vulnerable” as the continent warms more and at a faster rate than the global average.

The International Rescue Committee said Tuesday that in Somalia and some other African countries where it operates, people face “the sharp end of the climate crisis,” including emergency conditions from the current levels of global warming.

The international community must invest in climate resilience and famine prevention, the humanitarian group said in a statement.

“We’re extremely worried about the impact of continuing drought and conflict on vulnerable populations throughout the horn of Africa, where a large proportion of the population relies heavily on crops to eat and sell for their livelihoods, Kurt Tjossem, the group’s vice president for East Africa, said in that statement.

In Somalia, for example, 3.5 million people face hunger after a failed harvest, with farmers who depend on livestock seeing their animals die from thirst daily, he said.
__
Associated Press journalist Josphat Kasire in Nairobi, Kenya, contributed to this report.